The Boston Tenant Coalition, along with our constituents are currently celebrating and mourning the life of one of our dearest friends, a strong advocate and long time volunteer; Michael Stone. Michael contributed so much to the BTC over the years from including helping to plan and oversee Turning New Growth into Affordable Housing, a report written by Emily Achtenburg,  Annette Duke, and Margaret Turner in 2000.

This report outlined a comprehensive plan to create or preserve 10,000 low and moderate income permanently affordable homes in Boston .This report kicked off BTC’s 1st campaign “10,000 Affordable Homes” and was cited by the City of Boston in its first housing plan as well as the first “Housing Report Card” produced by the Archdiocese , Northeastern and the Boston Foundation later that year.

Since 2000 Michael actively participated in many housing justice campaigns, doing research, writing as well as strategy development and implementation. He was part of the advisory committee for BTC’s Community Stabilization Campaign. He developed and helped oversee the BTC’s Faces and Places of Affordable housing which was done in conjunction with JPNDC and UMASS Emerging Leaders Program (see www.yestoaffordablehomes.org)

Michael was one of the founders and is a board officer of Coalition for Occupied Homes in Forecloure (COHIF). COHIF is a coalition of housing, tenant, community groups, academics, consultants and government partners which promotes strategies and policies to keep tenants and former homeowners of foreclosed properties in their home and stabilize the communities.  COHIF has a pilot project in the Greater Four Corners neighborhood of Dorchester.  COHIF recently took title to occupied 10 formerly foreclosed homes in partnership with Dudley, helping 30 families remain in their homes and stabilize that neighborhood. A land trust is now being set up there and COHIF hopes to acquire a number of other occupied bank foreclosed properties and promote larger policies that would stop displacement and create more permanently affordable homes by the banks and financial institutions

Michael did extensive research and advocacy to support fair housing. Michael  researched and created charts annually for the BTC and others documenting the great disparity between Boston’s Area Median Income (AMI) and the Boston Household Income, including breaking that down according to race and housing tenure, which was very stark. This research has been key to BTC’s advocacy over the years and has led to policy changes favoring low income and households of color in Boston.   Most recently Michael has been very active in the BTC’s campaign to make changes to the City of Boston’s Inclusionary Development  Policy

He was also active with Action for Regional Equity.

He was considered  the guru on non-speculative housing  and shelter povert  by housing advocates. 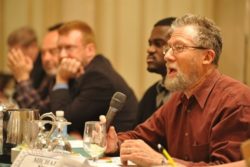 Boston Tenant Coalition (BTC) and the Coalition for Homes in Foreclosure (COHIF ) together have established a fund in Professor Michael Stone’s honor to support graduate and undergraduate students’ research assistance to community groups’ campaigns and advocacy for housing justice – in particular: advocacy for resources and programs for extremely low- income families and individuals; to further fair housing; and, to promote permanently affordable housing development without displacement in Boston.  The purpose of the fund is to allow the next generation of affordable housing scholars to be able to continue the kind of work Michael Stone did over the past 30 years to support the work of so many groups in Boston who cherished and needed his assistance.